skip to main | skip to sidebar

I have spent the entire weekend sitting mostly in one spot and crocheted and knitted. Damn but this stuff takes so loooong! I am however determined to test my fabulous new wool yarn to see if it felts. This is what I made. 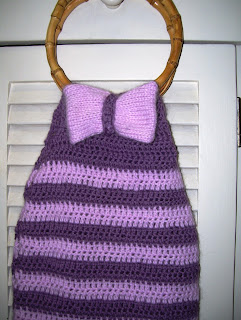 This yarn is amazingly soft! At almost $8 a skein I expect it to be! It is Sublime angora merino yarn that consists of 80% extra fine merino wool and 20% angora and seems to be made in England. I found a free pattern here http://www.thepurseworkshop.com/felted-crochet-bag-pattern.html. I did not make mine exactly the same as the pattern called for several colours and this was just too much for me being a novice! I had my Encyclopedia of Crochet Techniques handy all the time. The bow is from Nicky Epstein's - the Queen of felted bags - book, Fabulous Felted Bags and can be removed.

It came out very long and I worried that I will end up with a sausage shaped bag after felting. What would I carry around in that?! But then I read that felting shrinks more in the length than the width, so let's hope it is OK. It is in my washing machine for a second run as I post this. After the first short cycle it looked the same, so I put it in for a longer cycle. 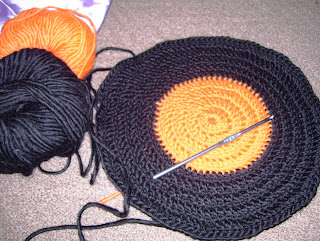 I also crocheted this round bag. I found the idea here http://www.instructables.com/id/felted-bag/. I know this yarn will felt as I have used it before but not in my front-loader washing machine. I read however that you can felt in a front-loader so let's hope! 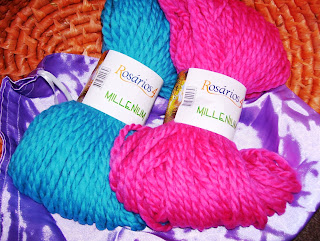 I also found this fabulous 100% wool yarn in a local shop. It is from Portugal. It also feels so soft but so difficult to knit with as it is double knit. I am trying to split the pink yarn but this seems very difficult as it breaks.

I will post again on the outcome of the felting process tomorrow. Let's hope my bags and pieces felt!

Posted by Pinktulip at 9:53 PM

I stopped over from Curiositys. When I read that you spent the weekend knitting and crocheting I had to see what you are up to. Lovely work! See you soon!

Pinktulip
Welcome to my blog! I have always loved crafting and have tried most. Currently I am mad about sewing,crocheting and knitting bags and sewing clothing. I hope you find some inspiration from my crafting adventures. Please feel free to leave me a comment. I promise to answer each one!

I'm listed in the big list of sewing blogs